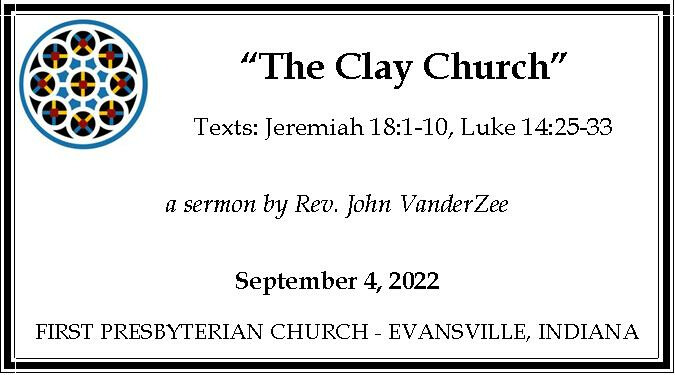 You may be glad to hear that I will not be preaching on the passage we read from Luke 14. It would certainly qualify as one in a series of sermons I might title, “Things we wish Jesus didn’t say.” We may give Jesus the benefit of the doubt by thinking: perhaps all this stuff about hating family members and giving up your possessions was a way for Jesus to weed-out the thrill seekers and the groupies.

Bruce Epperly writes that “in many ways, the Lukan passage reflects a form of theological hyperbole that presents an impossible possibility as a way of turning upside down our typical [way of seeing things].” (Cf, Patheos, September 3, 2013). In the end, Epperly couldn’t persuade me. I honestly felt that there wasn’t anything in these verses, after a superficial examination, that this church needed to hear at this time in its life.

Instead, I felt that there was more fertile soil in the passage from Jeremiah that Wendy read that would be equally comforting and challenging; for we all know that both are needed in this time in our church’s struggle to both remember and move forward.

Pottery has been the dominant image the church has taken from this passage, and many Christians will hear the text through the filter of familiar hymns and songs about potters and clay engrained in their hearts and minds. Remember this one?

Our passage starts out, like the old hymn, in a way we can all understand and appreciate. It’s the potter at work:

One of my biggest regrets as a fine arts major at Calvin College (now Calvin University) was not taking a turn behind the potter’s wheel in ceramics class. Instead, I sculpted what turned out to be a dreadful clay bust of a man’s head, and a coil pot I fashioned with long thin bands of clay which they now teach in elementary school. But I did watch in fascination as Professor Carl Heisman shaped several fine bowls, cups and vases at the kick wheel, which was the ancient method used at the time of Jeremiah, and that many traditional potters still use today. It may look easy in Dr. Heisman’s hands, but it’s not.

If you watch a potter from beginning to completion you will see it’s a serious enterprise with many stops and starts along the way. One wrong application of pressure from your left thumb - not enough or too much spin from the wheel - can be enough to turn a nicely developing vase or cup into a collapsed mess.

But skilled potters can also be remarkable for how quickly they can rescue such a mess by instantly starting to fashion a whole new vessel. It’s a project that looks almost magical!

It is what God intends for Jeremiah to witness when the Lord commands Jeremiah to go to the potter’s house where he will see the potter at work using the same process as the skilled potter that I described above.

Then the word of the Lord came to Jeremiah saying:

Can I not do with you, O house of Israel, just as this potter has done? Just like the clay in the potter’s hand, so are you in my hand O House of Israel.

That’s usually as far as some people tend to go with this passage because it is comforting and reassuring, assuming that God’s intention is only good and formative. But the Lord God goes on to say that the “spoiled” clay represents the sins of the kingdom of Israel - which is meant to be inclusive of the southern kingdom of Judah - and that God will “pluck up and break down and destroy” unless the nation turns from its evil ways. And likewise, if it turns from its evil, God will change God’s mind and refashion their hearts of clay and restore the kingdom. In each case, God changes the divine intent based on the actions of the people and their leaders.

Besides these verses in chapters 18 in Jeremiah, there are eleven other references to potters in Scripture, all in the Old Testament repeating much of the same theme as Jeremiah. Isaiah in one instance writes seemingly tongue in cheek, “Woe to you who strive with your Maker, earthen vessels with the potter! Does the clay say to the one who fashions it, ‘What are you making?’ or ‘Your work has no handles’?” (Isaiah 45:9).

Whether or not Isaiah meant it to be funny, the word that came to Jeremiah is clear and unambiguous. God is the potter, and the clay is the nation of Judah to whom he prophecies. Jeremiah speaks of Judah as simultaneous with Israel, but Israel has already been taken into captivity and only Judah remains. And this nation, represented as a defective clay blob, because of its idolatry and acts of social injustice, is in danger of being scrapped and put in the waste bucket for good unless it repents and turns again to doing what is right.

‘Now, therefore, say to the people of Judah and the inhabitants of Jerusalem: Thus says the Lord: Look, I am a potter shaping evil against you and devising a plan against you. Turn now, all of you from your evil way, and amend your ways and your doings.’

The last verse kind of leaves us hanging. A discarded clay of a misshapen vessel can be remixed and reworked into a new vessel again and again unless the clay is beyond saving which is what is implied here. Will Judah turn from its sin? Will the Lord God change the divine mind again? Will the reshaping continue? To be continued in a later sermon.

Where does that leave us? As Christians, we believe God reshaped a new covenant with the incarnation of Jesus, who, after his death and resurrection became the universal Christ whom we worship and serve. When the Holy Spirit came, the church of Jesus Christ took shape and is still alive today and reshaping still.

The Spirit is reshaping the church both as individual members and as a community of faith. And that brings up some provocative questions.

First, where in your story has God used events to reshape you as a potter working the clay? Where are you now being called to change? And how is your life taking shape into a vessel for Christ? When this reshaping comes, be assured it will be the means for re-creating you into what God desires.

Commentator John Debevoise suggests that legitimate though it may be to imagine God shaping and reshaping our individual lives, Jeremiah is here primarily addressing the life of the called community - in Jeremiah’s case the Jewish people - in our case the church of Jesus Christ. Both are part of God’s plan for renewal and re-formation. (Cf., Feasting on the Word, Year C, Volume 4, p. 30)

So, what is God doing on the potter’s wheel to shape and form First Presbyterian Church of Evansville? Where are we in this process of molding and remolding that God is doing? We are not a finished product but still a work in progress, and in all likelihood we will we never be finished.

What stories from the life of this church lift up faithful narratives of people who reformed their minds or transformed their behaviors in the face of crisis as God’s impetus for change? What stories from the life of this church’s corporate ministry has transformed the life of the larger community of Evansville and beyond? We still have an opportunity to remember and relive these stories within the last few months of 2022. Again, as with our individual lives, the re-shaping that has been done here and the remaking that is sure to continue will be the means for re-creating this church into what God desires for it.

Biblical scholar Sally A. Brown beautifully envisions that “at the end of the day, a potter steps away from the wheel covered with the stuff of her art, spattered head to foot with clay. Jeremiah envisions God up to the elbows of our making and remaking.” (Cf., Feasting on the Word, Year C, Volume 4, p. 31).

The stuff of God’s re-making is demonstrated for all time in the splattered blood of Jesus Christ that was shed for us and for the world, represented in the cup of salvation from which we will drink.

Which brings us back, if you believe it, to the passage that I didn’t want to preach on! It is the price that Jesus knew he was going to have to pay through suffering when he went to Jerusalem, and the cost he expected of his followers if they were going to go all the way with him. It is what we have come to know as the cost of discipleship: being ready to let go of everything that stands in the way of our following the Christ of God.

So, if you as a person and we as the Body of Christ are willing to be clay in the hands of the skilled and resolute master potter, be ready to be shaped and reshaped into the image of God’s Son, Jesus Christ.

But beware because this changing is going to cost something. We won’t be the same as we once were. Being clay in the hands of the great Potter will transform you; it will transform us as a church. And it is up to us to decide whether we have it in us to be re-shaped.

To our creator God and to the crucified and risen One be all honor and glory and blessing.