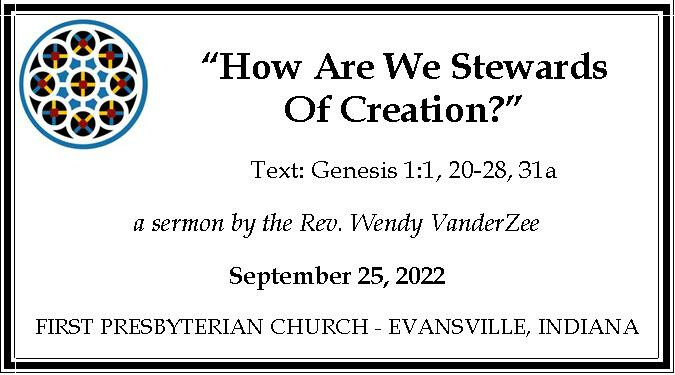 September 25, 2022, Sanctuary Blessing of the Animals, Sermon, "How Are We Being Stewards of Creation?"

“In the beginning God created the heavens and the earth.” The Bible begins the story with God. Before there was anything, there was God. And everything that exists - the entire cosmos - came into being because God created it. It was not always here. But God was. This is the beginning of the ordered creation.

The next few passages in Genesis lay out the chronological order of creation culminating in verse 28, namely, God’s creation of humanity and their dominion over the creatures. All human beings, regardless of gender, race, and station in life, are declared equal and given responsibilities for creation.  The seven days of creation do not inspire a spirit of superiority, of distance, of domination, or of exploitation. Genesis 1 calls us to marvel at and to love all creatures and all of creation. It inspires and testifies to a spirit of divine love, calling us to love as God loves, calling us to godly dominion.

Genesis 1 also describes an intricate and fragile web of life; what we now call ecosystems, which are interconnected loops where nothing is wasted.  Each creature has intrinsic worth and serves a purpose in the ecosystem.  Today, when humanity spends most of our time indoors, it is easy to feel disconnected from these ecosystems and nature in general.

Scientists are telling us Earth is in the middle of a mass extinction event. Over-fishing and over-hunting, habitat destruction, climate change, and other factors now threaten the existence of one in five species. When a species becomes extinct, the wisdom that creature could impart, all the creature gave to its ecosystem, and the particular way it glorified God by its very existence is lost forever. As God has charged us with dominion, species protection is in our hands. In the United States, the Endangered Species Act has served as the “Noah’s ark” of our time, ensuring protection for creatures in peril. Today, we are called to be mindful of all creatures, and to take stock of their presence.1

God is sharing power with humanity, choosing not to be the only one who has creative and ruling capacities. In Genesis 1:26, God completes the sixth day of creation and declares that humans should have dominion over “fish in the sea and birds in the sky, over the livestock and all the wild animals, and over all the creatures that move along the ground.” Having dominion is understood in terms of caregiving, not exploitation. In this vision, humans are to work for the care, wellbeing, and freedom of God’s creatures. Unfortunately, in too many cases, humankind has engaged in domination, rather than careful dominion.

Non-human creatures enrich our human vocation, teach us about God, and companion us on life’s journey. Pets teach us about empathy, the importance of play, to express joy, and to show affection. We give thanks for the diversity of all God’s creatures, and we are to devote ourselves to better care of, and relationship with them.

The Presbyterian Directory for Worship states that:

God sends the Church to share in the stewardship of creation, preserving the goodness and glory of the earth God has made. God cares for us through the gifts of creation, providing all that we need in abundance. As caretakers of God’s creation, we are called to: tend the land, water, and air with awe and wonder at God’s gifts; use the earth’s resources wisely, without plundering, polluting, or destroying; use technology in ways that preserve and enhance life; measure our production and consumption in order to provide for the needs of all; foster responsible practices of procreation and reproduction; and seek beauty, order, health, harmony, and peace for all God’s creatures.

In the service for the Lord’s Day we express our care for creation by: giving thanks for God’s creative power and sustaining care; acknowledging God’s call to stewardship of the earth and confessing our failure to care for creation; rejoicing in the promise of redemption and renewal in Jesus Christ proclaimed in the Word and Sacraments; offering our lives and resources in service to the creator of all; and committing ourselves to live as good stewards of creation until the day when God will make all things new.2

If God handed out report cards, how would humanity be doing?

Friends of ours had been saving for years and looking forward to a retirement trip of a six-month cruise around the world. After they returned, I was shocked by their report. No matter where they were, even in the middle of one of the world’s largest oceans, there was plastic and trash everywhere! There was no escaping it: beaches were filled with plastic and trash that had washed ashore. Even countries who worked to keep their shorelines as picturesque as possible, admitted fighting a never-ending battle of more trash.

Lying between California and Hawaii, the Great Pacific Garbage Patch is three times the size of France and is the world’s biggest ocean waste repository, with 1.8 billion pieces of floating plastic which kill thousands of marine animals each year. The Great Pacific Garbage Patch is so big that it has been nicknamed the ‘eighth continent’. It is the world’s largest collection of floating trash - and the most famous. The patch is now the target of a $32 million cleanup campaign launched by a Dutch teenager, Boyan Slat, now 23, and head of Ocean Cleanup, the organization he founded to do the job. Microplastics make up 94 percent of an estimated 1.8 trillion pieces of plastic in the patch. But that only amounts to eight percent of the total tonnage. Microplastics are the broken-down pieces of plastic that are now being found in fish and other creatures.  We ingest these plastics when we consume fish and other sea creatures.3

Ghost nets, a term coined to describe purposely discarded or accidentally lost netting, drift through the ocean, entangling whales, seals, and turtles. An estimated 100,000 marine animals are strangled, suffocated, or injured by plastics every year.

Publication of the garbage patch study coincided with a new report from Britain, Foresight Future of the Sea, that found plastic pollution in the ocean could triple by 2050 unless a “major response” is mounted to prevent plastic from reaching the ocean. The report declared plastic pollution to be one of the main environmental threats to the seas, along with sea-level rise and warming oceans.4

So how can we be the caregivers that God intended? Of particular concern to people of faith: climate change disproportionally affects the most vulnerable people at risk of hunger, especially women and children, and their livelihoods. The vast majority of the world’s hungry people live in fragile environments prone to climate hazards. In North America, projected changes in temperature, oil moisture, carbon dioxide, and pests associated with climate change are expected to decrease food-crop production by as much as 27 percent.

In today’s passage in Matthew, we are told “not to worry about life, what we will eat or what we will drink…Look at the birds of the air; they neither sow nor reap nor gather into barns, and yet our heavenly Father feeds them. Are we not of more value than they?” This doesn’t mean that we can do whatever we want for our own interests and then we’ll be taken care of. This passage immediately follows Jesus’ mandate to not store up treasures on earth and that no one can serve two masters. We cannot serve both God and wealth. When we love God and love as God loves, when we love the gifts of creation, we will have all that we need in abundance…for that is the way God loves…abundantly.

St. Francis of Assisi preached the Christian doctrine that the world was created good and beautiful by God but needs redemption because of human sin. He saw God reflected in nature and believed all of creation rendered praise to God. Many of the stories that surround the life of Francis say that he had a great love for animals and the environment and there are a collection of legends and folklore that have grown around him. Pope John Paul II declared Francis the patron saint of ecology and said that Francis’ love and care for creation was a challenge for us “not to behave like dissident predators where nature is concerned, but to assume responsibility for it, taking all care that everything stays heathy and integrated, so as to offer a welcoming and friendly environment even to those who succeed us”.5 It is a popular practice close to his feast day for people to bring their pets and other animals to church for a blessing.

Presbyterian churches are encouraged to be Earth Care Congregations through the Presbyterian Hunger Program. I am told there was an Earth Care committee a few years ago here at First Pres. Perhaps it is time to revisit this effort and for members of all ages to study what individuals as well as the church can do to care for creation, the way God intended. All are invited to use the bulletin insert to learn about Earth Care Congregations, pick up one of the Handouts on Food and the Climate Crisis on the tables outside of the sanctuary, and to borrow some of the materials on the sideboard in the parlor.  I have added a few copies of Rebecca Barnes’ book: 50 Ways to Help Save the Earth: How You and Your Church Can Make a Difference to the resources on the sideboard. More resources await in the library or online. Colin Bell writes: “Our work is not to save the planet, or to bring about the kingdom of God by our own efforts.”  “We are (rather) called as members of a resistance movement against all that would destroy God’s creation, trusting in God’s grace for the future.”6 What will the world be like for our grandchildren and their generation? God says it’s up to us. Amen.

4)  Laura Parker via natgeo.com, The Great Pacific Garbage Patch Isn’t What You Think it Is

6)  Colin Bell, Creation Care in the Gospel: Reconsidering the Mission of the Church