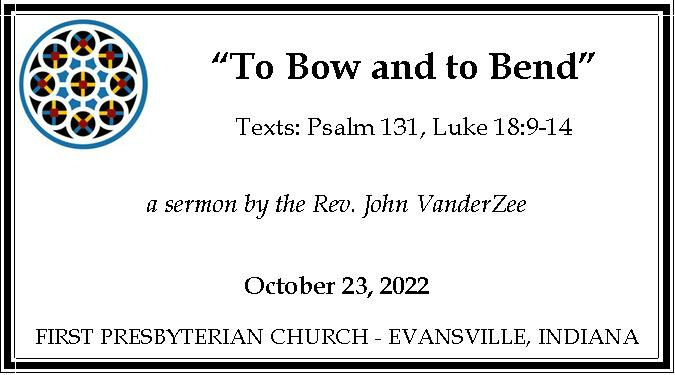 I don’t know whether you have noticed it or not in your dealings with me, but I can come off as kind of aloof and prideful. I care too much about my appearance. I am constantly comparing myself to other people. Before I act or speak, I wonder what effect it would have on other’s opinion of me.

And the ironic thing in acknowledging all these things to you is I think that I am showing humility which you in turn might admire. “Wow, listen to how self-effacing John is! What a heart-felt display of true humility!”

You see how complicated humility can be? As soon as we decide for ourselves that our number one goal over the next month or year or whatever is to be humbler than the next person - or at least appear by others to be - we set ourselves up for failure when we start believing it! As soon as you set out to be the humblest person that anyone would ever want to meet, you’ve already lost. There’s no winning this humility thing.

The biggest mistake we make when it comes to trying to be humble is that we think it’s a matter of self-deprecation on the one hand or self-improvement on the other. We think it’s all about us, all about me. And here we are - back where we started. It’s a vicious circle.

This prideful attitude has even crept into some of the old hymns we used to sing:

Yes, that last one is actually in the old red hymnal!

However you feel about these hymns, they are no longer part of our weekly worship. Yet they are still ingrained in our collective memories and lingering theology. So, before we get so uppity and look down upon this Pharisee in Luke 18 as the quintessential biblical blowhard, we had better take a long, hard look at how we regard ourselves and our own spiritual temperament. Let’s begin.

The writer, Luke, starts off this parable very similar to how he started the parable of the unjust judge Wendy explored last week. Luke introduces the parable by telling us what it is about and why Jesus feels the need to tell it. Luke writes in verse one, “He also told this parable to some who trusted in themselves that they were righteous and regarded others with contempt.”

That’s just in case we didn’t get it if he had just simply told the story from the get-go without an introduction. Something like this:

OK, I got another one for you. Two men went up to the temple to pray, one a Pharisee, the other a tax-collector (the crowd boos and hisses). The Pharisee, standing by himself, was praying like this, “God, I thank you that I am not like other people, thieves, rogues, adulterers, or even this tax-collector here (Yeah, I hear ‘ya man). I fast twice a week; I give a tenth of my income. . .” (The crowd Oooos and Ahhs!).

The prayer could easily have gone on about the Pharisee’s righteous actions, but Jesus ends it there, his point having been made. So far nothing the people heard was terribly unsettling. The Pharisee was simply being pious like a good, model Jew of his time.

In fact, some scholars even suggest that the prayer of the Pharisee was not some caricature of a prayer, but a variation of a real and rather standard prayer of thanksgiving at the time.

So, what do you think the crowd’s reaction was when Jesus said that the tax-collector is the one who went down to his house justified, rather than the Pharisee?  Instead of any “Ooos” or “Ahhs” there were audible gasps! And then came the punchline - just in case there was anything lost in the translation:

Once again, as usual, Jesus leaves the crowd stymied and scratching their heads. It’s possible that some Pharisees among them may have felt convicted. But the rest were already gathering more evidence that this rabble-rouser, Jesus, had to be stopped.

And that brings us back to the question, “what does it mean to be humble and is it something we can achieve or attain? Is this tax-collector simply a ridiculous caricature of a saintly servile person, or can he be a realistic model for us as Christians living out the first quarter of the 21st Century?

Rick Warren, who I don’t quote often, wrote, “True humility is not thinking less of yourself; it is thinking of yourself less.”1

Another way of saying it comes from the late Frederick Buechner:

True humility doesn’t consist of thinking ill of yourself but of not thinking of yourself much differently from the way you’d be apt to think of anybody else.

It’s the capacity for being no more and no less pleased when you play your own hand well than when your opponents do.2

Remember the tax collector’s physical stance as compared to the Pharisee? His posture was bowed and bent, reluctant even to look up to heaven as he prayed, “God be merciful to me, a sinner.” The tax-collector knew that cheating the common folk by taking of portion of the tax he collected for himself was dishonest at best. His confession was the beginning of a turn in the right direction. The old Quaker hymn perfectly captures the meaning of humility too as bowing, bending, turning.

‘Tis the gift to be simple, ‘tis the gift to be free,
‘tis the gift to come down where we ought to be,
and when we find ourselves in the place just right,
‘twill be in the valley of love and delight.
When true simplicity is gained
to bow and to bend we shan’t be ashamed,
to turn, turn, will be our delight
‘till by turning, turning we come ‘round right.

Substitute the word simplicity with humility. Bowing, bending, turning, changing: these are the trademarks of the humble person - not putting ourselves up or down, but realizing that we are, every moment of every day, standing, bending, turning in the very presence of an awesome God.

The season of Thanksgiving is coming soon. In fact, since the farm harvest is pretty much already in, it should have already started. I think President Lincoln was wise when he placed it later in November, because it gives us more time to think about the connection between humility and gratitude.

Scott Hoezee would have us imagine our sweet old grandmother praying over the turkey dinner on Thanksgiving:

“Dear God, we are grateful that we are not like other families in other countries who are starving and don’t know where their next meal is coming from, or people who don’t know enough to offer thanks to you, like we’re doing now. We thank you that we are not like families who have fallen apart, so they never gather around the table anymore like we do. We rejoice that we went to church and do what all people should do: render thanks to you as the Giver of all good gifts.”3

I hope I’m not too generous in thinking that there aren’t too many grandmas who would pray like that. Hoezee is being a bit droll here to make a point. And the point is that we need to examine our everyday spirituality to truly assess the ways that we compare ourselves to others no matter what direction that comparison takes us. The Pharisee was not so much grateful to God as he was grateful only when he compared himself to the tax collector. The moment we begin stacking ourselves up in comparison with others around us, we begin to behave in accordance with that: how we act, how we think, what we do that is better or worse - more or less deserving of God’s beneficence and grace.

What we forget when we get into this mindset, of course, is that everything - everything - that we think, say, and do that may be commendable and generous comes out of nothing less than the grace of God demonstrated in Jesus Christ working God’s will in us through the power of the Holy Spirit.

Chelsey Harmon, in her commentary, points out that

“. . . The posture of the tax collector is more like what we might hear at an AA meeting: honesty, admission of powerlessness, a desire for something different. Through the support of the network, out of the public eye over a long obedience in the same direction, connecting with and relying on God, the Higher Power, the humble are exalted and made righteous. The tax collector shows us someone who appears to be on the beginning of the road of transformation.”4

As believers in and followers of Jesus Christ, we are also now a new creation, and it is the Holy Spirit working in our lives that enables and empowers us toward goodness. Therefore, Paul can write:

Margot Benary-Isbert, the German-born children’s book author discovered a prayer by an unknown 19th century abbess that is as spot-on today as it was then. It’s written primarily for us older folk, but there are lessons here for all of us no matter our age. And so, I conclude with it:

Lord, thou knowest better than myself that I am growing older and will soon be old. Keep me from becoming too talkative, and especially from the unfortunate habit of thinking that I must say something on every subject and at every opportunity.

Release me from the idea that I must straighten out other peoples’ affairs. With my immense treasure of experience and wisdom, it seems a pity not to let everybody partake of it. But thou knowest, Lord, that in the end I will need a few friends.
Keep me from the recital of endless details; give me wings to get to the point.

Grant me the patience to listen to the complaints of others; help me to endure them with charity. But seal my lips on my own aches and pain - they increase with the increasing years and my inclination to recount them is also increasing.

I will not ask thee for improved memory, only for a little more humility and less self-assurance when my own memory doesn’t agree with that of others.

Teach me the glorious lesson that occasionally I may be wrong.

Keep me reasonably gentle. I do not have the ambition to become a saint - it is so hard to live with some of them - but a harsh old person is one of the devil’s masterpieces.
Make me sympathetic without being sentimental, helpful but not bossy. Let me discover merits where I had not expected them, and talents in people whom I had not thought to possess any. And, Lord, give me the grace to tell them so.  Amen.”6

If you can pray Margo Benary-Isbert’s prayer in all candor and self-awareness, you are on your way to becoming an imperfectly true, humble person. Just don’t let it go to your head.

To God be all honor and praise and glory.