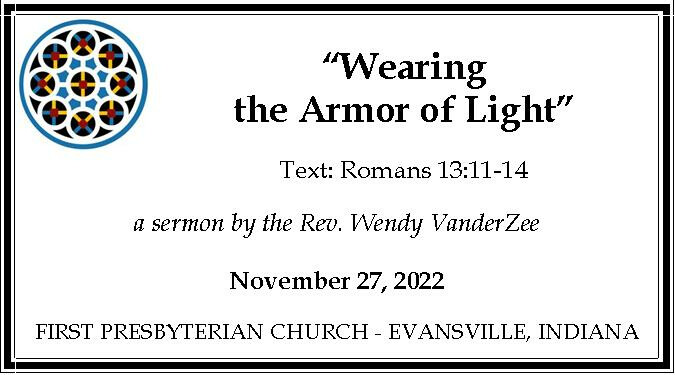 As a child, I found the first Sunday of Advent very confusing. “If we were getting ready for baby Jesus and Christmas, why were we reading Scripture about “the end times” or Christ’s second coming? (What I now know as eschatological texts). And why were we singing songs that sounded sad and slow instead of joyful upbeat songs? Personally, I felt that the Firestone albums from the gas station, and the Eddie Arnold and Frank Sinatra Christmas albums excited me and prepared me, at least so I thought, for Christmas! It wasn’t until years later when I learned about the true meaning of Advent that the mournful tunes made sense to me. They sounded as much like drudgery as waiting often feels.

The first Sunday of Advent typically has Scripture which doesn’t refer to Jesus’s birth but the reign of God or Christ’s second coming. This is when the fullness of God’s kingdom will be realized: “the end of times”. Paul, and most early Christians, believed that Christ was going to return to earth shortly, within their lifetimes. Scripture passages for Advent 1 reflect this in their urgency and encouragement to “be ready...salvation is nearer than you think.” Some people and some cultish communities, even today, set dates when they profess Christ’s return will occur.  These days, of course, pass by, but the message of anticipation and immanence is not one to hastily dismiss. We don’t know when that day will be, but that doesn’t preclude us from being ready and internalizing the import of the message.

Through the years that have passed since Paul’s era, that immanence has been lost by most of us, to the point that it is often ignored altogether. Paul was not so much wrong in his calculation, as he was right to believe that every moment in time is rich with divine possibility. He was right to urge his readers “to wake up from sleep” - to pay attention and be alert to the imminent inbreaking of eternity “within the flux of time,” as Karl Barth put it. 1

How many of us look back over our day or week and have a hard time coming up with what we did, or who we spoke with? We may know our day was filled with “stuff” and that we were “busy” but the particulars escape our minds somehow. How often do we feel that our days are passing by and we aren’t sure what we accomplished?

In Paul’s letter to the Romans, he encourages them to wake from their sleep and get dressed for the new day. Lay aside the darkness and ways of sin, selfishness, and ignorance and put on “the new clothes of Christ: the armor of light.” Paul believed that the new world in Christ was beginning to break forth in the present but would be fulfilled in the impending future. As Christians, it is our duty, even our responsibility to acknowledge this new life in Christ which begins even now. The coming new day begins with Christ, and we are to clothe ourselves with him and to walk into the future that he is leading. That future has its beginning in the present moment.  Cynthia Campbell compares this “new creation” to a new day. She shares this wonderful image that

“as Paul paints the picture, it is still dark outside when this theological alarm clock goes off; the day is ‘new’ but not quite here.  Perhaps it is that mysterious moment when the darkness of night begins to give way to shadows, and there is just enough light to know that morning is around the corner. This is a time of anticipation and Paul urges his audience to action. It is time to get up and get dressed. 2

We are to put on the armor of light - the garments of Jesus Christ. His life, his teachings, his way of being are the garments that we are to put on as we get ready to meet the future. “This means adopting a new way of life. Leaving a life of sin, partying and drunkenness - in other words, things that dull our senses and distract us from what is really going on in the world. We are to turn from jealousy and quarreling - things that injure relationships and destroy community. The new day God is bringing is a time when God and humanity will be reconciled - when peace, justice, and integrity will be the hallmarks of human society.  Paul wants Christians to start living now as though this new day has already begun.”3

Pauline theology includes the metaphor from Ephesians 5:14: “Sleeper, awake! Rise from the dead,” and the second from Galatians, “It is no longer I who live, but it is Christ who lives in me” (2:20). He is talking about a new world being born and how the Christian man or woman belongs to this new world not to the old. Christ is the turning point between the old way and the new way of life. When we put on the new clothes of Christ, the armor of light, we move into this new day, this new way of living. Because sin, darkness, evil, and death are conquered. We are given life eternal.

And this new freedom, this new life, is a life we can begin to live now in the present. This is what is meant by “love your neighbor as yourself.” Primarily this means that we love as we are loved by God. We are to do things which will benefit others, which improve their lives or their situation.  As you know, love, when it is used in the New Testament, is not an emotion - a warm fuzzy feeling - love is an action. We know that God loves us because of what God has done for us through the life, death, and resurrection of Jesus. Through knowing Christ, we are now able to see a glimpse of the future God has for the world when God’s reign will be complete and “the great positive possibility” becomes a reality. The armor of light which we now are charged to put on is a reflection of the light that is to come.

We know, of course, that the moon isn’t the source of its own light; it reflects the light of the sun. But it does so brightly enough that we can see by its light. We aren’t able to look  directly at the sun, but we can look at the moon and see a glimpse of the sun’s power.

In the same way, when we put on the armor of Christ’s light, we can reflect the light of Christ for others. We are never able to see God directly, but we can see glimpses of God reflected by  one another. So we travel on - together.

We are all familiar with the comforting words of Psalm 23: “Even though I walk through the darkest valley, I fear no evil for you are with me.” For now, there will continue to be darkness in this world but God’s light is also there with us. And we have the lights of one another. The light does not eliminate the darkness, but it lights our way one step at a time. As a car’s headlights light the road enough for us to keep driving, our paths receive enough light to take one step forward at a time, so we are able to keep moving.

When we are grieving, the light of others reflects God’s love and light so that we can keep moving one step at a time. We are never able to see what the entire journey looks like, but the phone calls, the cards, the invitations, the casseroles, the presence of someone who cares and will listen - these small lights enable us to move ever forward. They are also a reminder that God through Christ is always with us, though the world may feel very dark at times.

We will never shine as brightly as Christ, but our light - each of our lights together - form a brighter light which dispels more of the darkness.  As on Christmas Eve, when we each have our own candlelight, together we have enough light to brighten the Sanctuary. Though this Advent journey together may feel very different this year, remember that we have one another. We are not alone. And the one who is the source of all light, Christ, lights the journey for us, one step at a time.