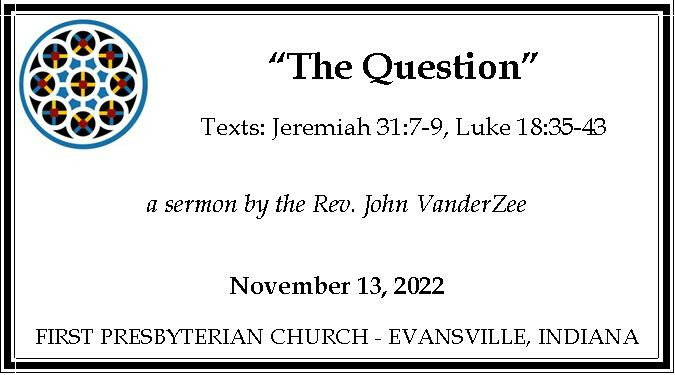 Some of you know Bloomington better than others, but there are several intersections around town where you are likely to find a panhandler asking for money, food, or work. One of those intersections is less than a mile from our house: the corner of East Third and Clarizz Boulevard, just in back of Bloomingfoods. We are regular customers at Bloomingfoods so I have to stop at that intersection frequently.

I have every excuse in the book for not rolling down my window and giving something. Who knows what they’re going to do with the money? Buy liquor or drugs, perhaps. Don’t they know there are places around town they can go to for help? What if I do give them something? Am I enabling their dependence? Maybe this is some kind of scheme or ring led by a pimp who skims off a percentage of the take. I have actually heard of that happening in some cities.

Anyway, the other day, I had just come out of Bloomingfoods, and I was approaching that corner. It was a beautiful day, so I rolled down my window to get some fresh air. A sign-carrying young man looked at me with anticipation and started walking toward me. I stopped, rolled up my window, turned the corner and pulled away. I know. I felt bad for a few moments, but then I forgot about it. Until just now as I write this sermon.

That young man was probably no stranger to failure. Whether his intensions were good and his head was in the right place doesn’t really matter. What were the odds of someone stopping and giving him money? One in twenty, one in a hundred? He knew what it meant to fail. The sign he held could have just as well said, “Ignore me if you wish, I’m used to it.” But he persisted out of that hope that somewhere along the way, someone might help.

This dynamic of hope and hope dashed is the focus of Scott Cairns’ poem, The Theology of Doubt:

I have come to believe this fickleness
of belief is unavoidable. As, for these
back lot trees, the annual loss
of leaves and fruit is unavoidable.
I remember hearing that soft-soap
about faith being given
only to the faithful - mean trick,
if you believe it. This afternoon,
during my walk, which
I have come to believe is good
for me, I noticed one of those
ridiculous leaves hanging
midway up an otherwise naked oak.
The wind did what it could
to bring it down, but the slow
learner continued dancing. Then again,
once, hoping for the last
good apple, I reached among
bare branches, pulling into my hand
an apple too soft for anything
and warm to the touch, fly-blown.1

Bartimaeus, son of Timaeus was in a very similar spot: year after year of dashed hopes, yet never quite ready to give up like that stubborn leaf. For the sake of brevity and to deprive him of any dignity he may not deserve, we’ll call him, Bart, Blind Bart. Ordinarily you might find Bart on any street corner or outside of any temple or market in Jericho begging for money. His blindness, we presume, kept him from getting a paying job or at least a living wage. The difference back then was that Jewish law required law-abiding Jews to give alms to the poor and needy. So, in a sense, begging was his vocation. If you couldn’t work, you begged.

Bart picked his spots strategically. He felt or heard from others what was going to be happening that day and where the crowds would be. You see, when you’re blind all the other senses are at their optimum level. The road from Jericho to Jerusalem usually had plenty of foot traffic, but today was different.

The highway was heavily trafficked. He had heard about a prophet named Jesus of the line of King David who was going about the villages healing and preaching. He and his disciples, with a huge crowd in tow, were heading in that direction. Finally, Bart thought, here’s my chance. What is there to lose?

So, Bart placed himself along the Jericho Road just ahead of the throng. Only this time it wasn’t alms he was seeking. This was his big chance to fulfill his heart’s fervent desire: Bart wanted to be healed of his blindness. He wanted to see again. Bart was evidently born with sight but somewhere along the way of his luckless life - we are not told how - he lost his sight. Now, here was the opportunity of a lifetime. The great prophet he had heard about was coming.

There was not a lot in Bart’s favor. The crowd was massive and boisterous. Would Jesus even hear his cry for help? Would Jesus pass by close enough for Bart to get his attention? Would Jesus even take the time to stop? Were there others more deserving of the prophet’s consideration? None of this seemed to deter Bart for he was a desperate man who could no longer accept defeat. The risk of failure didn’t matter. The worst that would happen was that he would be no worse off than he is now - blind and poor.

Let’s stop the story for a moment to consider something. Put yourself for a moment in Blind Bart’s sandals. What would you attempt do if you knew there was a pretty good chance that you might fail but it didn’t matter? In other words: What would you try to do if the attempt itself was worth it whether you succeeded or not?

Keep that question in the back of your mind as we continue the story. I will come back to it.

Bart’s ears perked up as the noise of the crowd increased. He heard that it was Jesus. So, he began to shout,

“Jesus, Son of David, have mercy on me!”

Since he couldn’t see whether Jesus heard him or not, he kept shouting over and over, “Jesus, Son of David, have mercy on me!”  Those in the crowd nearest to him became agitated and annoyed.  “Shut up, Bart.  Chill. He’s not going to bother with you. Can’t you see he has other things on his mind? How is he going to hear you above this crowd, anyway?” But he ignored all of them, and in fact, began to shout out all the louder,

“Jesus, Son of David, have mercy on me! Please!”

Then it happened; Jesus heard Bart’s desperate cry and suddenly stopped. It may be a small thing, but you might notice that Jesus didn’t walk over to poor Bart. Instead, he said to his disciples, “Call him over here.”

Bart didn’t waste a second. He threw off his cloak, presumably so it didn’t impede him from rushing over to Jesus. You can imagine in your mind Bart running, and people kind of guiding him, this way and that, until he came face to face with Jesus.

What would you do if your name was being called? What would be your response? “Well, Jesus, can I give it a little more thought and I’ll send you a text?” “Here’s my list, Jesus.” “I don’t need anything, Jesus, I’m just fine.” Your response, it seems to me, has more to do with your attitude, or way of thinking about Jesus than what your actual needs are. Do you believe he can fulfill your heart’s desire? Do you trust him?

That’s about as good a request as anyone can ask of Jesus isn’t it? “Let me live again!”

Well, finally Blind Bart heard the words his soul had been longing to hear: “Go; your faith has saved you.” And immediately Bartimaeus, son of Timaeus was a new person. He was no longer Blind Bart for he had regained his sight. “And he followed Jesus on the way.”

Notice for a moment Jesus response. “Your faith has saved you. Or as one of the other Gospels has it, “Your faith has made you well.” This is one of seven times recorded in the Bible that Jesus used these words to heal someone. Seven times. That must have some significance.

As a former hospital chaplain, this poses some problems for me, and maybe it does for you as well. What if a person who longs to be healed is not healed. Does that mean he or she didn’t have enough faith - they didn’t believe hard enough? I’m not sure I have a satisfactory answer to that question. It still puzzles me. But what I think Jesus at least is saying here is that healing is not a one-sided thing. It is a collaborative process. Your faith in what God can do is just as important as God’s power and choosing to do it. God cannot do anything for us unless we take part. God cannot heal our wounds unless we expose them. God cannot win our battles unless we are willing to put up a fight. And if what happens isn’t quite what we had in mind, maybe God has a better alternative.

Remember that question that I had asked toward the beginning. Something like, “What would you attempt to do, if you knew you might fail, but it didn’t matter?” If you recall, that was Bart’s predicament before he met Jesus.

Would your cry be for healing?  Maybe it would be for recognition, or safety, or success. We all can use a little of these things. Or maybe your shout would be for justice, or peace, or fairness, or equity, or love, or any number of things that the world calls idealistic and the Gospel calls righteousness.

So often, the world seems to be so stacked against us, and what we attempt to do for the sake of the God’s realm so risky, that we just give up trying. Yet the promise of the Gospel is that we are free like Bartimaeus to risk, to dare, to love, to work, to struggle because we have God’s assurance that there is nothing too small or too big that cannot find fulfillment in Jesus.

Then there is that other question: the one that Jesus asked Bartimaeus, “What can I do for you?” Not “What would you attempt to do if nothing else mattered?” “What can Jesus do for you?” With Jesus’ infinite compassion and Bartimaeus’ persistent faith working together as our examples, maybe the question should become “What can we do together?” You may think, “Gosh, wouldn’t it be cool if Jesus was right here to ask of us individually and as a community of faith, “What can we do together?

Think of it this way: There is no time when Jesus is not asking, “What can we do together?” All we need to do is open our ears and our hearts and listen, and finally to respond in faith. And then, like Bartimaeus, son of Timaeus, follow Jesus on the way.

To God be all honor and praise and glory.