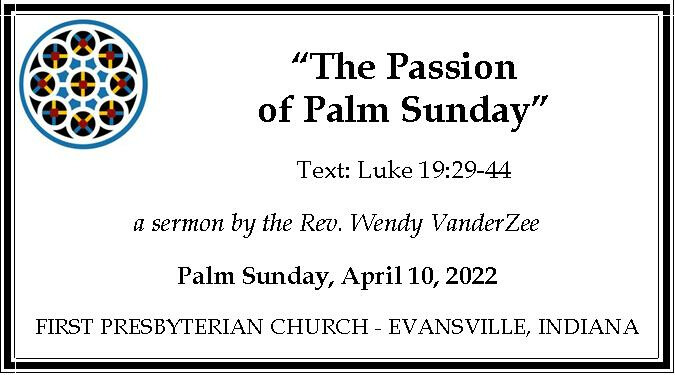 Palm Sunday has always been an emotional day for me.  No story in the New Testament is more passionate, more affecting than the story of a humble King Jesus, riding a donkey into Jerusalem to a modest cheering crowd.  Knowing what follows for Jesus just a few days later, it seems beyond ironic to be cheering him on. I have felt emotionally torn: the high of Jesus riding in as King and at the same time being reminded once again of the ridicule, torture, and pain he will face in a few days.  I can’t help wondering how Jesus managed the dichotomy of his emotions that day.  I imagine he felt frustrated, weary, disheartened and profoundly sad that those closest to him, his disciples, still did not understand his destiny.

Would we have been like those along the path of Christ’s procession, who waved palms and cheered “Hosanna!”, only to turn around and abandon him five days later while others cried out for our Savior’s execution?  Would we have been as fickle in our faith as they were?

This story, more than any other in the gospels, portrays the irony and the tragedy inherent in Jesus’ mission and destiny.

The story begins in Bethany, the home of Jesus’ dear friends, Mary and Martha.  From there Jesus directs his disciples to find a young donkey in a nearby village.  The owners would know instinctively what to do when they brought the colt to Jesus.  They became giddy with anticipation. Finally, Jesus will stake claim to his kingship, riding in triumph into Jerusalem.  They thought it perhaps another sign of Jesus’ peculiar humility that he didn’t seem to share in their excitement.  In fact, he seemed curiously pensive, even sad.  Was he frustrated that the disciples still didn’t seem to “get it”?  He had told them three times by now of his impending death, and yet, they still didn’t comprehend what he told them.

Jesus was helped on the colt, and what began as a small, unassuming cortege became an unpretentious procession as they closed in on Jerusalem passing through village after village. People gave up their clothing and plucked palm branches from the banks of the creek to spread in the path of the approaching king.  They waved the branches in the air with shouts of “Hosanna”, songs of praise and thanksgiving reminiscent of the songs the angels sang when they foretold Christ’s birth.  It was a stunning sight!

William Barclay wrote that there are several important things to note about this entry into Jerusalem:

First, it was carefully planned.  This was no sudden impulsive act.  Like the prophets of old who resorted to dramatic display to put their message into a picture which no one would fail to see, so Jesus planned to do something dramatic and symbolic to get his message across.

Marcus Borg and John Dominic Crossan in their book, The Last Week, said historical evidence suggests that there were actually two processions into Jerusalem that occurred around this time.  It was the beginning of the week of Passover, and from the East came the modest peasant procession of Jesus of Nazareth riding on a donkey, cheered on by his followers and whoever else was caught up by his teachings and miracles.

From the West came the Roman governor of the region, Pontius Pilate, who had left from the port city of Caesarea Maritima, and now approached Jerusalem on his warrior stallion with all the pomp and pageantry of one who rightly represented the Roman emperor.

The Bible does not record this other royal entry, but it was common for the Roman governor to appear during Jewish religious festivals, just to show the Jews to whom their true allegiance “rightly belonged”.  Crosson and Borg go so far as to propose that Jesus may have deliberately started his procession to symbolically counter Rome and the dominate system that it represented.  No doubt it would have gotten the attention of the regional authority.

Even today, Jesus enters our towns, our communities, and even our lives in ways that are in stark contrast to those symbols of power and celebrity of our day and age. He comes from the other direction. His procession is the alternative to that of the glory-seekers, the self-important and the despots.  Christ doesn’t demand our attention so much as he coaxes it and encourages it.

Jesus will find a way to capture our attention and allegiance when we seem to be losing our way, whether we are caught up in our own grandiose schemes, absorbed in the busy-ness of life, or caught up in an unexpected crisis.  Jesus finds a way to get his message across in ways that are appropriate for the times we are living in.

Second, Jesus’ entry into Jerusalem was not only planned, but it was an act of glorious defiance and of superlative courage.  By now we know that a hefty price was on Jesus’ head as more and more political and religious leaders took offence at his provocative message.  It would have been understandable that, if he had to go into Jerusalem at all, he should have slipped in unseen or even in disguise. But instead, he entered in such a way as to focus the whole limelight on himself, not because he loved to be center-stage, but because he wanted to force the people who came out of curiosity to make a choice.  It is breathtaking to think of Jesus, a fugitive of justice, and virtual outlaw, deliberately riding into a city with every eye on him.

Some wonder whether in this post-modern age we know real courage when we see it, much less act courageously when circumstances call for it.  Of late, courageous acts are visible all around us. Seldom have we seen such profound courage as President Volodymyr Zelenskyy’s impassioned words standing up to Putin and the Russian war machine.  Or the common people of Ukraine who respond with uncommon courage defending their homeland. There are the first responders in our country who run toward natural disasters and acts of terrorism.  Healthcare workers, police, firefighters, teachers, grocers, and others stepped forward during the Pandemic. There is also the everyday courage of people who stand up for what they believe to be right when the risks are high, or the teenager who resists the urge to retaliate after being bullied, the young person who comes out as trans or gay, or the family member who puts his or her own life on hold in order to take care of a sick loved one.  Jesus’ courageous walk into Jerusalem serves as a model to us all.

Thirdly, Jesus’ action was not only planned and uncommonly courageous; it was a deliberate claim to be king, an intentional fulfilling of the reference in Zechariah 9:9:

Lo, your king comes to you; Triumphant and victorious is he,

Humble and riding on a donkey, On a colt, the foal of a donkey.

But even in his understanding of this prophecy, Jesus underscored the kind of kingship that he claimed.  The donkey in Palestine was not the lowly beast that it is in this country.  It was indispensable if not noble.  Only in war did kings ride on horses.  When they came in peace they rode upon a mule. So, Jesus, by his action came as a king of love and peace, not as the conquering military hero imagined by the Zealots.

To what extent are we sometimes embarrassed by Jesus’ brand of kingship?  Do we seek a knight in shining armor when we find ourselves in trouble or in great distress?  The way of servanthood, the way of peace, the way of sacrificial love, is seldom popular nor does it get us immediate results. But it is the way that Christ prefers. And in the end, no matter how powerful the systems of the world seem to be in our present day, Jesus’ way will be victorious.

Finally, Jesus’ entry into Jerusalem was one last appeal.  In this action Jesus came, as it were, with entreating hands outstretched saying; “Even now, will you not take me as your king?”  Before the crowd would turn mad with hatred, he, one final time, besought them with Love’s invitation.

According to Luke’s gospel when Jesus was on the crest of the Mount of Olives overlooking the city, ready to ride the final few miles in the city, he stopped.  Filled with sadness and foreboding, he wept over the city.  He knows what was going to happen there.  Jesus was looking past his bittersweet Passover meal with his friends, past the betrayal and arrest, past the final ordeal.  He knew that the Jews would be embarking on a political mission against the occupying Romans that would lead decades later to failure and to the complete destruction of this beautiful city including the venerable temple.

One can only wonder at the thoughts and feelings that drove Jesus’ emotions at that time.  If only the people who adored him along the road to Jerusalem would abandon their dreams of political control and would choose instead the way of peace and righteousness and justice.

The tears of Jesus are the same as the tears of God when God sees the needless pain and suffering that people and nations inflict upon one another. Tears shed when the temptations of wealth and influence deflect Christ’s vision of peace and economic justice, or when political power corrupts minds and hearts.  It doesn’t have to be this way, God says.  One of the tragedies of Palm Sunday is that in two thousand years, humanity has not learned much.  The human condition is unchanged.

This is the real passion of Palm Sunday:  Jesus appeals to you and me; “May l be your king?”  Will you claim Christ as king when our spiritual emotions are high, but then abandon him and his teaching when the going gets tough or we find ourselves out of line with what is culturally accepted?”

Will your commitment to him stand the test of time and circumstance?  Will you claim Christ as your everlasting King of Glory and Prince of Peace?  The only way of knowing is to faithfully follow him all the way to the cross.

Today we are near the end of the Lenten season and begin Holy Week.  I imagine it has been difficult for you these past few weeks in your journey without Rev. Fleming.  Your memories of past Lenten journeys and Easter celebrations were bound to creep in from time to time.  Today on Palm Sunday we stand on the edge of Holy Week much as Jesus stood on the outskirts of Jerusalem.  Facing the week without Kevin’s leadership will be different and there undoubtedly will be feelings of loss and grief along with the varied emotions this week entails.  But none of us is alone; for God holds us and we have each other to lean on. Our hearts may be full of emotion, but these are gifts given to us by our loving Creator, who understands and knows our pain.  May we look anew at this story we know so well, and perhaps this Easter receive a deeper understanding of what resurrection truly means.  Amen.