The organ at First Presbyterian Church, Evansville, Indiana, was designed and
built by C.B. Fisk, Inc., of Gloucester, Massachusetts. This instrument has 29 stops
and 1,922 pipes and is Opus 98 of the Fisk firm. Charles Fisk made an initial visit
in September, 1980, and set the course for the design of this instrument. As an act of
the church's strong trust in his successors, the contract was signed in April, 1984,
four months after Charles Fisk's death.

The visual and mechanical design of the organ began in December, 1989, with a site
visit and the subsequent construction of a scale model of the church. American
walnut was chosen for the casework, and its design was inspired by the many
Victorian Gothic details in the church. The visual design was developed by Charles
Nazarian, design consultant, with members of the Fisk shop. He also supervised the
construction of the organ's decorative shades in his own shop in Gloucester. His
co-workers were David Calvo, carver, and Dana and Dean Richards, cabinetmakers.

The divisions of the organ are laid out in a straightforward manner. The Pedal
pipework is placed in a rear case and is visible through carved screens at the sides of
the console area. The Great is on two chests just behind the impost, separated by an
area reserved for the Swell key action and the Great stop action. The Swell division is
located in the top center of the case. It is arranged in a long narrow chest that allows
for Swell shades to be placed on three sides of the box and provide dramatic control of
the volume. Several shades also open toward the back wall of the church. These
shades open before the front-facing shades, thus sending the earliest sounds down to the choir and indirectly to those seated on the main floor. The console area is at the center of the instrument, providing the most direct mechanical key and stop actions. A
mechanical combination action is included to give players the ability to make large stop changes quickly. The console has been made as compact as possible to allow for choristers to gather around the organist.

Of the flute stops in the organ, four have been retained from the previous instru-
ment. The Swell Stopt Diapason and the Great Chimney Flute are made of pine and
date from the Marshall Brothers instrument of 1874. The Great Harmonic Flute is also
of wood and dates from the Casavant rebuild in 1925. The construction of this stop
gives a characteristic "overblowing" quality which is associated with the orchestral flute. The Spire Flute of the Great is a new stop patterned after the 17th century
German examples which were, in turn, imitations of the Viole, a stringed orchestral
instrument. The sound of this stop is soft, yet bright and transparent, voiced for
accompanying both choir and solo stops on the organ. Generally the Flutes are voiced
more delicately than the Principals with narrower wind ways and smaller toeholes for
a softer, more delicate sound.

There are two sets of stops that produce the "Cornet" effect. The Nazard and Tierce
of the Swell may be combined with the Stopt Diapason and the Italian Principal to
form a traditional French "cornet decompose." The Twelfth and Seventeenth of the Great may be combined with the Flutes or the Principals to achieve the German "Sesquialtera"
combination. These mutations can also give a reedy tone to the Principal chorus.

The Reed stops of this instrument are quite varied. This is most apparent in the manual Trumpet stops. The Great Trumpet is intended to provide a smooth round (almost
"tubby") tone for use with congregational singing and for reinforcement of the Principal chorus. This stop is based on examples in 17th and 18th century German organs. The
Swell Trumpet is more fiery, built along 18th century French lines. Each manual division also contains a secondary reed, each of which is from the former instrument. The Bass .,
Clarionet has a new 16' octave (it was an 8' stop previously) that allows the stop to be
used in chorus with the German Trumpet as well as provide a large number of color-
ful sounds for solo or chorus use. The Hautboy is a characteristic Oboe; it serves as a
solo stop and can enrich the sound when used with the foundations, a necessary
combination for much 19th century music. All of the reeds have been voiced by
carefully curving their brass tongues until maximum tone is produced and speech is
still prompt.

The Pedal division is purposely somewhat small to allow the manual divisions to be
as large and diverse as possible. There is a Principal chorus (16, 8, 4) as well as a Reed
chorus (16, 8). The Pedal Trombone is a large wooden reed stop, orginally from a
Skinner organ in Buffalo, New York, that provides a very smooth, low-pitched sound.
The Pedal Trumpet is the former Casavant Swell Trumpet and provides a tone that
adds to the clarity of the Pedal line. The Prestant (mechanically borrowed from the
Great) is rather soft but very prompt in speech and can be used alone with good effect.
The Bourdon, dating from the Marshall Brothers instrument, is still softer, and the
Open Wood gives great weight and dignity to this division.

The manual divisions are winded from a single large wedge bellows, following the
tradition of historical winding systems, that gives a gently flexible character to early
music. A large winker may be engaged for music requiring a more stable wind supply.
The organ is tuned in a slightly unequal temperament first developed by Charles
Fisk for Opus 78 at House of Hope Presbyterian Church, St. Paul, Minnesota. The
temperament gives flavor to the common keys for performance of earlier music but
still allows the chromaticism of the 19th and 20th centuries to be heard without
compromise. 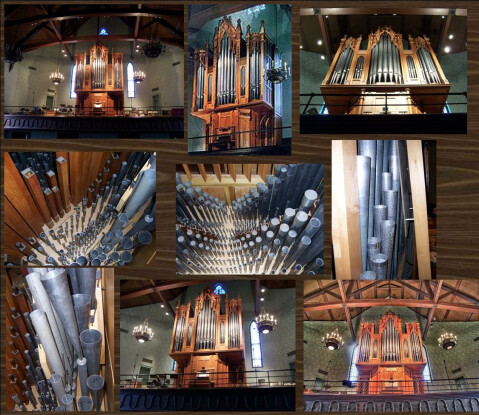